Stal Sprengenhorst consists of 20 stables, an indoor- and outdoor arena, a round pen and the land of family van der Schaft. Rien, Inge and Romy train their own horses as well as horses from owners daily. Besides training horses Rien, Inge and Romy give instructions  to clients from outside. 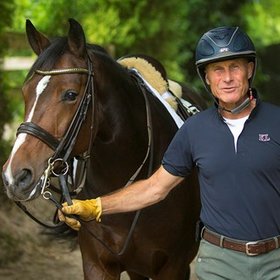 Since Rien was a young boy he loved animals. Dogs and horses have always been his favorites but because he grew up in the city of Rotterdam, contact with horses was almost impossible. However where there’s a will there’s a way and on a barn called “Manege Hillegersberg” Rien has spend many hours. When Rien was 11 years old he had the privilege to sit on a horse for the first time. From that time he helped out in the stables as much as possible and in return he was allowed to ride a horse or a pony every now and then.

After secondary school Rien successfully completed Deurne, a well known Dutch school to became a real horseman and teacher. After his graduation Rien started working at a barn in Zelhem where he met Inge. Because Inge had to finish her education, Rien trained her horse Monseigneur and eventually made it in to the Dutch dressage team with him. Rien and Inge developed themself more and more in schooling dressage horses and especially the many lessons they had from Mr. Oothout have shaped them as dressage riders.

Even after being a rider and trainer for so many years Rien is still very passionate about riding and teaching. For him the thrill of riding never gets old. The way he works with horses is to develop them and turn them into real athletes. The challenge for him is to get the best out of every horse.

Rien has been teaching many riders from all over the world, like South Africa, the USA, France, Italy, Germany and Sweden. He has been the teamcoach of the Netherlands and is the Finnish teamcoach since 2019. 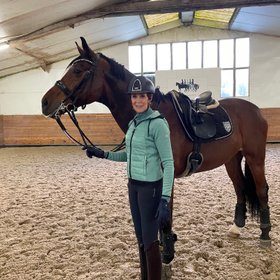 Inge started riding ponies when she was 6 years old. Her grandfather bought her a pony and if the pony became too small, they were switched for a bigger one, till ultimately it became a horse.

In 2007 Inge coached the Malaysian Alia Soraya for the South East Asian games in Thailand. Alia was very successful, she won the team qualifications and team gold. In november 2010 Inge travelled to China with Alia to coach her for the Asian-Games.

Besides a very elegant and sensitive rider, Inge is also a great teacher with a lot of succesfull students like Liselotte and Florentine Rootveld, Jennifer Harnett (currently competing at Grand Prix level) and Celine Schelstreate from Belgium.

At the moment Inge is riding El Niño, her goal is to train him to the best of his abilities and show this in the ring. 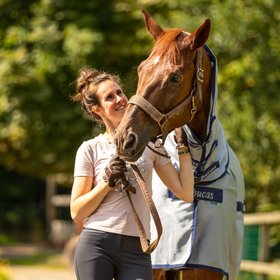 Romy’s first pony; Bimbo arrived at Stal Sprengenhorst when Romy was 1,5 year old. After some pony-playing years Romy started riding horses at the age of 14. With Indiana Jones, one of her first horses, she made it in to the junior B squad, later on she competed Madorijke in the Young Riders classes. With Madorijke she won the International Young Riders Festival in Hagen Germany and got in to the A squad. After the Juniors and Young Riders Romy competed U25 with Seigneur and also made her Grand Prix debut with him.

After her time in the youth classes and high school Romy now works full time at Stal Sprengenhorst. She mostly focuses on educating horses and teaching her students. In the mean time Romy competed 4 horses in the big tour. One of them is Be Painted, this horse has been with the van der Schaft family his whole life and has been ridden by Romy ever since he was a 4 year old. This is actually what she likes best; training horses from a young age up to the highest level. For her this is what forms you the most as a rider, it helps you understand a lot about the stages you go through schooling horses and therefore it helps you to be the best teacher you can be for your horse.

In 2013 Romy got her ORUN level 4 instructors license, so besides schooling horses, she is also teaching, mostly at Stal Sprengenhorst but also clinics at other locations. Being able to see how students and their horses improve is extremely motivating for her.

In 2020 Romy got the chance to start breeding her own horses, a new chapter in our lives started. A lot of time was spent on the search for the right stallion with our mares. In the mean time 3 beautiful foals have been born in 2021 and more to come in 2022. You can read all about our foals at the breeding section of our website.

For Romy one of the nicest things of her job is to train horses with her parents and show them at any level. It is amazing to see the horses grow, not only in muscles, but also in their state of mind. We try to work with our horses in a way that makes their life nicer, we try to get them stronger and healthier in their bodies, confident in their minds and all together happier then they would be without us.